Welcome to the 2015 Victorian Infant Collaborative Study newsletter. We hope this finds you all well and looking forward to the holiday season. We have had a busy year with a lot happening at all the centres involved in the VICS studies. 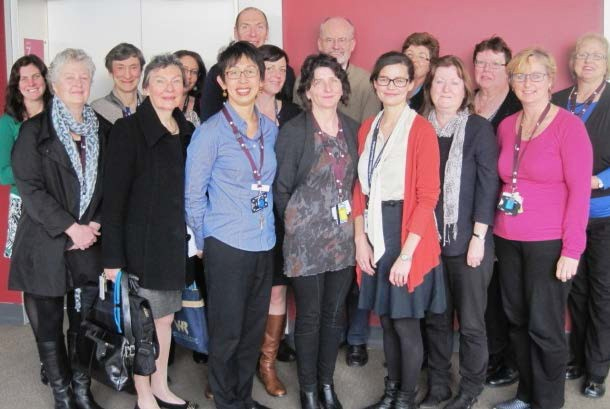 Seasons Greetings from the VICS Team

It has been over ten years’ now since we last recruited a VICS cohort. Since then, there have been several new advances in the way that preterm babies are cared for. In particular, we are now using more non-invasive means of helping babies breathe after they are born, with devices like CPAP and high flow nasal cannulae. A medication called Magnesium sulphate has been shown in large scale trials of women at risk of preterm birth to improve development and reduce cerebral palsy rates in preterm children. This medication is now common practice in Victoria. In addition, there has been increased appreciation of how important parent mental health is for a child’s development especially those born preterm. There are now more support services available for families while their babies are in the neonatal units.

We want to see if these advances in neonatal care have changed the developmental outcomes of the tiniest and most immature babies. We will be recruiting extremely preterm or extremely low birthweight babies from all the main perinatal centres in Victoria, i.e. Royal Women’s Hospital, Mercy Hospital for Women and Monash Medical Centre. We will also recruit term babies so that we can compare their outcomes. We will invite the families to return when their children are 2 years’ of age to see how their development has progressed.

In a recently accepted paper in the American journal, Pediatrics, we reported how scores on cognitive tests and tests of academic progress of ex-preterm children in the VICS cohort born in 1991 or 1992 changed over time, from early childhood until late adolescence. Not only were we interested in how scores changed over time, but we wanted to assess the relative contributions of biological events, such as problems that arose in the nursery, and social influences, such as the language spoken at home and the mother’s years of schooling. It has been reported by others that cognitive scores improved over time, but in these reports they had not allowed for the fact that different tests are used at different ages, or for what might happen to children over the same time who not born preterm but on time, at term. It has also been assumed that the influence of biological events occurs early, then wanes as the children age, whereas the influence of social variables is minimal early and increases over time.

What we found was that the scores on the tests for ex-preterm children were consistently lower than those born at term from ages two to 18 years, with no obvious increase or decrease in the differences between the groups. In addition, some of the biological influences persisted throughout childhood and into adolescence, and did not wane as the effect of the social influences increased.

Being reared in a house where English is not the only language spoken is a disadvantage in early life, and that is because the tests are all developed and administered in English. Consequently children reared in non-English-speaking households are disadvantaged and score lower, but not because they are delayed compared with other children. By adolescence non-English-speaking has no influence. Having a mother who was better educated and being advantaged socially influences scores later in life, but not early, as expected.

What can families do for their children’s development? The answer is the same as for any children – speak to them, respect them, love them, and cherish them.

We are pleased to share good news with the VICS community. In the recent round of research funding from the Australian National Health and Medical Research Council, the VICS team were successful in obtaining funding to assess the health and well-being of the VICS 1991-92 cohort in young adulthood. As you are all aware, VICS has been a state-wide initiative since the mid-1970s aimed at evaluation of outcomes of intensive care in the tiniest and most premature of babies. Pioneered by Bill Kitchen, and led by Lex Doyle over the last few decades, both Neonatologists at the Royal Women’s Hospital, it is a collaboration of all intensive care nurseries in the state of Victoria (i.e. Royal Women’s Hospital, Mercy Hospital for Women, Monash Medical Centre and the Royal Children’s Hospital, along with the Newborn Emergency Transport Service, the Victorian Perinatal Data Collection Unit and Murdoch Children’s Research Institute. These studies have highlighted specific health and developmental challenges faced by the tiniest and most premature babies as they grow up. One of the cohorts were recruited over a 24 month period in 1991-92, and around 560 extremely preterm (born before 28 weeks of pregnancy)/extremely low birthweight (born weighing <1000 g) or term-born children.

These participants have returned for assessments at ages two, five, eight and most recently at 15- 18 years of age. We will now be able to assess the cohort again. Starting in 2016, when they will begin turning 25 years of age, we will invite them to return for a comprehensive assessment of their physical health, wellbeing and transition to adult life. This study will provide vital information on specific health challenges faced by young adults born extremely preterm/extremely low birthweight, and assist in designing strategies for health preventions to optimise their health and wellbeing.

We are in the process of contacting the families of the children born in 1997 who were recruited for the VICS research. All of these children were less than one kilogram at birth or less than 28 weeks’ gestation. Along with them there is a wonderful group of families of full term babies who participate alongside the premature born teenagers.

We have started to send out the online survey recently so if you haven’t heard from us let us know as it is possible we don’t have your current contact details.

We have had a very positive response from the teenagers contacted so far.

Many of you are currently very busy undertaking VCE/VCAL – we wish you all the best with this. If we haven’t been in touch already, please call or email us with any contact detail updates.

Thank you so much to the 2005 cohort for coming back for assessments. We are now in the process of analysing the results from the study, which we hope to share with the VICS families and the wider scientific community at paediatric conferences in Australia and USA in 2016.

A trial assessing the effectiveness of a working memory training program in extremely preterm children, and its impact on academic outcomes, is currently in the final stages. The study, known as the IMPRINT study, recruited 91 children and families who are in the VICS 2005 cohort, of which 80% of these children participated in an MRI scan prior to and immediately following the training program. All children underwent five to seven weeks of working memory training in the home, and the study has now completed follow-up assessments immediately after training and 12-months following training. The study is now underway with its final, 24-month post-training follow-up, having seen almost half of the children. The IMPRINT study will be completed by the middle of next year and would like to thank all the children and families for their continued participation and support.

If you have any questions about the study, please contact Leona Pascoe on 9936 6608.