Did you know: Victoria has the world’s best survival rate for premature babies

Intensive care of very tiny babies was very different before the 1970s compared with what it is today. Back then, there were no ventilators to help babies with breathing problems. Other care was very basic, but included incubators to keep babies warm, and adding oxygen to the air that they breathed. The ability to feed babies was also limited to tube feeding, or short-term glucose and water through intravenous drips.

Not surprisingly, survival rates for the tiniest babies, those less than 1000g at birth, were very low, averaging less than 10% through the 1960s. Not only were their survival chances very low, but also the few who did survive were far more likely to have substantial long-term health problems, particularly affecting their ability to think, walk, talk, see and hear.

As intensive care developed, particularly with the advent of ventilators in the 1970s, the survival rates started to rise. There were a few astute paediatricians caring for babies around this time who recognised that not only was it important to improve the babies’ chances of survival, but it was perhaps more important to know how intensive care was affecting their long-term health.

Dr Bill Kitchen at the Royal Women’s Hospital was one of the paediatricians who wanted to follow children who had survived through childhood, to establish the health problems that arose as a consequence of neonatal intensive care.

As Dr Kitchen began his follow-up studies, he started with children who were born in the Royal Women’s Hospital. However, he soon realised that what was happening at one hospital might not be happening at all hospitals, and he established links with the other hospitals in the state of Victoria that cared for tiny babies, in particular the Queen Victoria Hospital (now Monash Medical Centre), the Mercy Hospital for Women, and the Royal Children’s Hospital.

It was from these early collaborations in the late 1970s that the Victorian Infant Collaborative Study group arose.

VICS has followed the progress of premature babies for over four decades. The results can be found published in world recognised medical and scientific journals.

VICS team leader, Professor Lex Doyle, started working with premature babies in 1975 when there were few specialised intensive care beds and ventilators were not suitable for tiny babies.

But in recent times the survival rate of babies of birth weight 500-999 grams born in Victoria had improved from one in four to three in four in fewer than 18 years. Prof Doyle attributes this increased survival to the fact that most of these tiny babies are now born in one of the three major maternity hospitals in the State.

Now that the survival rate for the very tiny premature babies is so high, our current goal is to make sure that these very early babies are able to look forward to a healthy life free of any major health problems.

One of the ways that we are able to monitor the health of tiny babies is to recruit a comparison group of children who are born in the same year but are full term and of normal birth weight. These children are very important in our studies and we are grateful to their parents for allowing them to help us in our research. 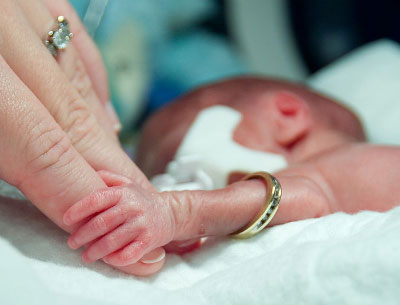