Welcome to the 2017 Victorian Infant Collaborative Study newsletter. We hope this finds you all well and looking forward to the holiday season. We have had a busy year with a lot happening at all the centres involved in the VICS studies. 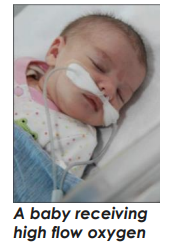 It has been over ten years now since we last recruited a VICS cohort. Since then, there have been several new advances in the way that preterm babies are cared for. In particular, we are now using more non-invasive means of helping babies breathe after they are born, with devices like CPAP and high flow nasal cannulae.

A medication called magnesium sulphate has been shown in large scale trials of women at risk of preterm birth to improve development and reduce cerebral palsy rates in preterm children. This medication is now common practice in Victoria. In addition, there has been increased appreciation of how important parent mental health is for a child’s development, especially those born preterm. There are now more support services available for families while their babies are in the neonatal units. We want to see if these advances in neonatal care have changed the developmental outcomes of the tiniest and most immature babies. We will be recruiting extremely preterm or extremely low birth weight babies from all the main perinatal centres in Victoria, i.e. Royal Women’s Hospital, Royal Children’s Hospital, Mercy Hospital for Women and Monash Medical Centre. We will also recruit term babies so that we can compare their outcomes. We will invite the families to return when their children are two years old to see how their development has progressed.

We are now actively recruiting for our Victorian Infant Collaborative Study (VICS) young adult study (1991-92 cohort). We are inviting the young adults (25 year olds) who were either born very preterm (born before 28 weeks of pregnancy/ born weighing less than 1000 g) or were term born from three major Victorian hospitals – Royal Women’s Hospital, Monash and Mercy Hospital. These participants have been followed at ages two, five, Gorgeous Baby Theo, born in 2016 at 27 weeks, pictured at eight months old eight and 18 years. 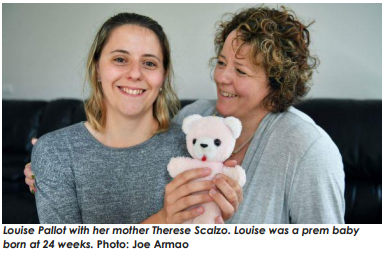 We are most grateful to all the participants who have so willingly returned to take part in this important research. We greatly appreciate the time you give to us. As part of the study we are doing a comprehensive set of health assessments including examining physical health (heart and lung function, blood pressure, bone density, muscle strength, blood tests for cholesterol and diabetes, 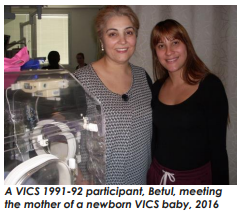 vitamin D levels) and mental health. So far we have assessed around 70 participants and are looking forward to meeting and assessing more participants next year from all the three major hospitals. The results from this study will help us to better understand the health challenges faced by young adults born very preterm/low birth weight, and to improve long term health outcomes and quality of life. Recently this study was highlighted in The Age newspaper, along with some heartwarming stories of a few of our lovely participants who have participated in the study recently. A printable version is available here. (http://www.theage.com.au/victoria/premmies-seo-here-20161109-gsl75q) Thank you once again for all your help and continuing involvement in our study. Please remember to keep in touch with us, phone or email us with any contact detail changes. We hope you have all enjoyed the festive season and best wishes for a happy 2017.

Babies born very tiny or very early have more breathing problems after they are born compared with babies born on time and of normal size. After they are discharged home, they continue to have more breathing or respiratory problems than other children, so it is important to know how their lungs are growing through childhood and into adolescence. In the VICS 1991-1992 cohort, we measured air flow out of the lungs at both eight and 18 years of age. We showed, for the first time, that obstruction to air flow out of the lungs increased between eight and 18 years in children born very tine or very early. It was worse in those who had lung injury in the newborn period, a condition known as “bronchopulmonary dysplasia.” It was also worse in those who were smoking at 18 years of age. As lung growth continues until the mid-20s in healthy people, and then slowly declines over the rest of one’s life, it looks like children born very tiny or very early will not Louise Pallot with her mother Therese Scalzo. 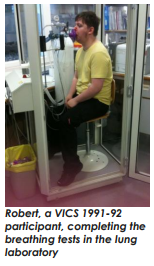 Louise was a prem baby born at 24 weeks. Photo: Joe Armao A VICS 1991-92 participant, Betul, meeting the mother of a newborn VICS baby, 2016 reach their full lung growth potential. They may then end up with more breathing problems as adults. One thing they can do to improve their lungs is to not smoke. The study has been published in a leading lung journal called “Thorax” (Thorax 2016; doi:10.1136/thoraxjnl-2016-208524.)

A big thank you to those who have participated, or who are still intending to participate, in the online follow up. We are working on the analysis and hope to have some results to share with you in the coming months.

Thank you for your ongoing participation in our research studies. We will have some published results to share with you in the near future.

To update us with your current contact details, including your email address

To find out more about the Victorian Infant Collaborative Study, visit our website:

A .pdf copy of this newsletter can be found here.